I move my spot by about Two meters yesterday, where I had a view of Table Mountain in the distance.  I was just settling down to paint when a wedding group arrived to take shots of the bridal party.  I decided to include them in the picture but have to admit that I spun my wheels a bit and didn’t settle down till they had gone.  And I had left my camera in the car, which was an added element of disorganisation.  In any case here is the picture.  I eventually added the group in from memory.  When they left the groom smiled at me.  There was a pregnant moment when I could have chatted to him but decided not to intrude in their day, which is not my usual thing.  So we grow. 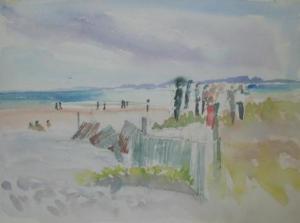 I also saw, over the back of the dune where I usually sit, there is a beautiful view of False Bay and Cape Hangklip which I will do next time I do not have to shelter from the South Easter.  Strand is a great walking beach, especially at this time of the year, there are always people walking up the fence, just beyond the pipe and back.  I tried to capture some of them too.